Driving across much of Iowa, one can easily get the impression that this land is flat. But Iowa is also known for its rolling hills, as celebrated in the paintings of Grant Wood and the final scene (with credits rolling) of the Bridges of Madison County, as Clint Eastwood's car disappears and reappears over each successive hill (Meryl Streep looking on). Paddlers from all over Iowa tend to head for the Driftless Zone, a region which Iowa shares with Minnesota, Wisconsin and Illinois which escaped the glaciers during the last ice age, known for its winding rivers winding through canyons with bluffs as high as 1700 feet. Most popular is the Upper Iowa River, winding along the Minnesota border in the northeast corner of the state. But other parts of Iowa offer gems for paddlers to discover. In 2010-2011, my best friend Jeff and I discovered the Middle River, an exciting river by Iowa standards. When it has enough water it has riffles or short rapids every tenth of a mile over most of a 30 mile flowing through Pammel Park, south of Winterset, and indeed, under a covered bridge.

But a fall favorite is the Maquoketa river, flowing for 150 miles on its southwestward course across east central Iowa along the southern rim of the Driftless Zone. While the Maquoketa has little to offer in terms of whitewater or even riffles, it's the scenery that captures you, and which, at times, feels wholly un-Iowan. The primo stretch lies between the Man-Moq dam just outside Monticello and Highway 136. Here the river gently course and winds its way through deep, canyon-like valleys with high, tree-covered bluffs with frequent rock outcroppings and palisades often obscured by trees. In the late afternoon hours of autumn, cloud silhouettes move softly across the fireburst tree cover as eagles circle about. 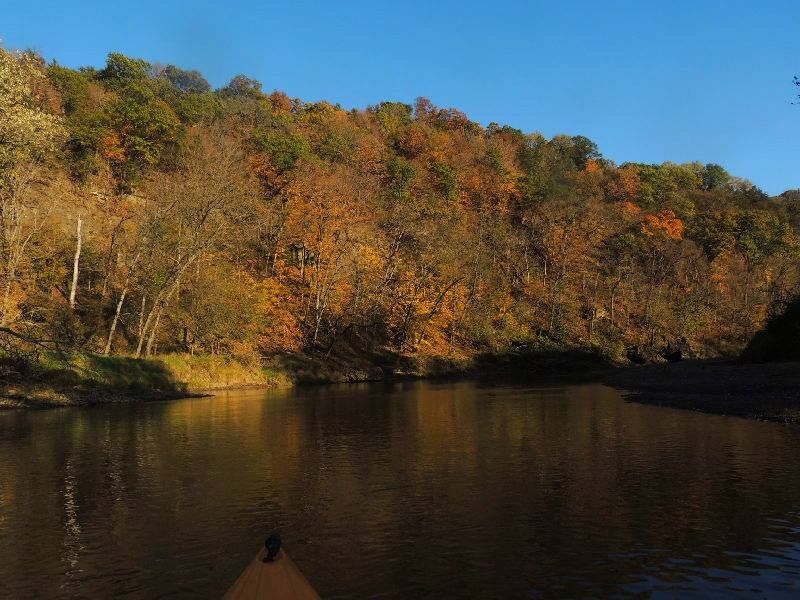 Shadows Playing on the Bluffs

The highlight is Pictured Rocks. Here you can stop for lunch on sandbar and admire the limestone rock face soaring overhead. 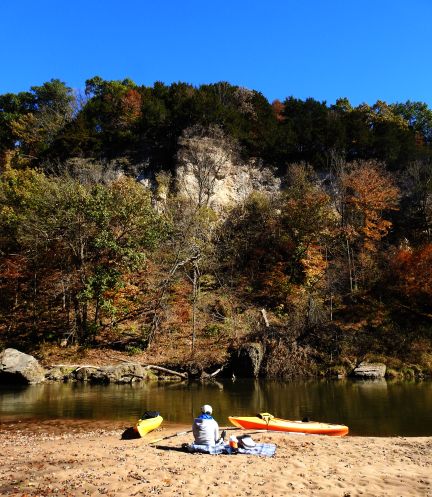 A long loop southward passes one of the nicest boat ramps you will ever see, hewed out of the limestone from the surrounding rock bluffs. Nearby are rock faces where climbers take on the sheer cliffs.This is also the site of Camp Courageous, a summer camp for children with disabilities, strategically located in one of Iowa's most stunning landscapes. Hiking in this valley also features spectacular views. My first return in decade conjured up old memories of dream-like quality from when I hiked these paths as a child. One can end the trip at Indian Bluffs, but if you continue on to Highway 136, you will pass through an eagles' den, where you will quickly lose count of the number of eagles you see. 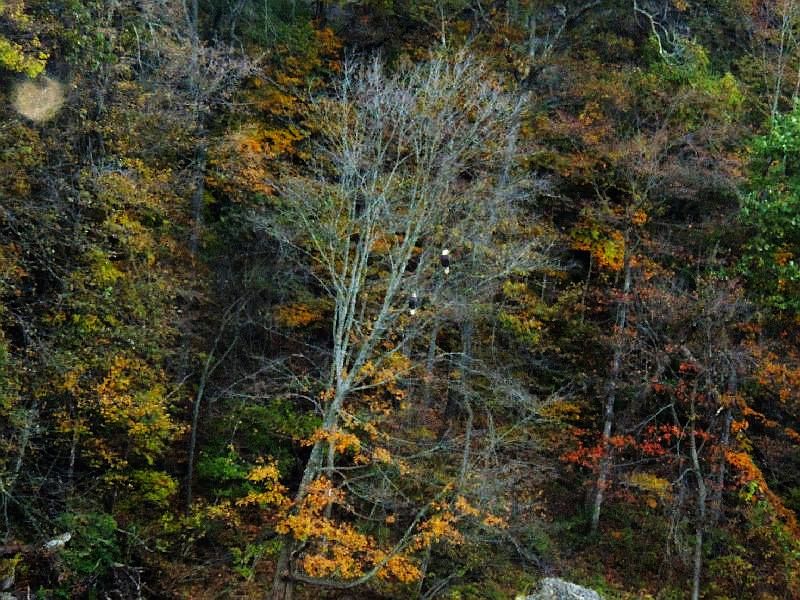 A pair of Bald Eagles perched on a dead tree

The Maquoketa is largely spring fed, so the water tends to be transparent and you can see that sandy bottom, a major contrast from Iowa's mostly muddy rivers. The occasional truck-sized boulder that once tumbled from the top of a rocky bluff only to land alongside or even in mid-stream must be navigated. The surface of the water is deceptively calm, even glassy, but the water has real force and moves one right along at speeds above 3 mph. When covered by golden leaves, the leaves travel alongside your boat as if they are on the same life-journey as you, uncertain where their journey might come to its conclusion. Moments like these encourage meditation, even satori.

In 2016, friend Eddy and I were able to revisit the primo stretch and returned a week later for a first run at the stretch from Pioneer Road to Monticello. It did not disappoint. Loads of eagles, bluffs with rock faces and beautiful river bends with sandbars and a few eccentric homes. The river splits at Hopkinton, where both legs course rocky whitewater falls which a paddler with a seasoned paddler wearing a helmet might find exciting (we chose to portage, unsure of the degree of danger involved). Eagles accompanied us all along the way. But all along the Maquoketa you will also see deer and on occasional red fox. Aside from eagles, there are plenty of red-tailed hawks, turkey buzzards, great blue herons, kingfishers and an assortment of other less common birds, such as cedar waxwings. 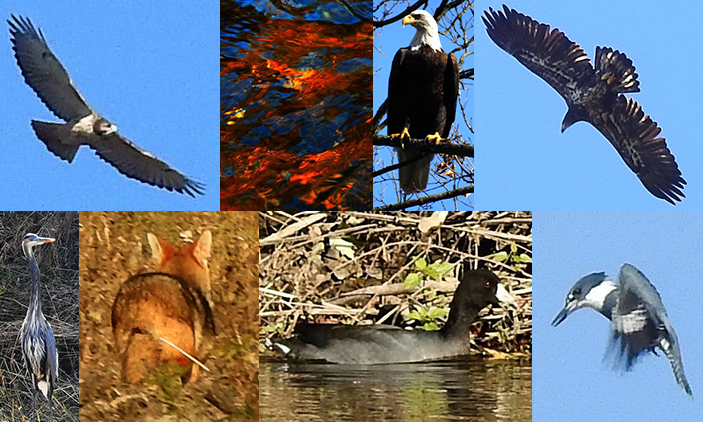 The ideal time to spot wildlife, of course, is at sunrise, but the animals also tend to come out for a last drink of water before sundown.

The small river village of Canton marks a kind of arbitrary mid-way point at mile 53. Great scenery follows at Buzzard Ridge, but by Morehead access you may find yourself thinking you are heading out to the all-too typical Iowa scenery of pasture and farmland. Not so. Along the stretch approaching Lakehurst Dam just west of the town of Maquoketa, the scenery again becomes mesmerizing with varying and unusual topography, a riot of colors and stunning reflections on the flat surface of the water to be captured by photographers. The portage over the 25' high Lakehurst Dam is relatively easy (portage left), if you don't mind carrying your boat down a modestly steep, grassy incline. The river soon skirts around the north side of Maquoketa town before joining up with the 96-mile-long North Fork Maquoketa River (another gem, about which we will blog more later). Our expectations were that we had left the rocks and high bluffs behind, but while they are fewer and farther between, one still gets a thrill from occasional stretches of tree-lined bluffs with large rock outcroppings.

For whitewater paddlers, we can refer you to the Little Maquoketa, about which we know little, except that it is an entirely distinct and shorter river (30 miles long) in Iowa's Driftless Zone. But for the paddler who is looking for trees, rocks, animals and birds, the main Maquoketa is hard to beat. And autumn is the time to catch it.

Our future plans include finishing the last twelve miles from Spragueville out to the Mississippi and on down to Sabula, Iowa's island town. We also plan to explore the earlyt stretches through Backbone State Park and the remains of Lake Delhi (where a dam burst in 2010 while we were out, luckily, paddling a different river). We will keep you posted.